“Our honey is a mix of everything. From whatever the bush has to offer, added to whatever they take from the garden and orchards. It's a gumbo.” 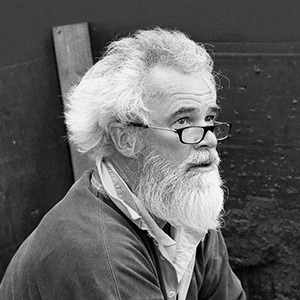 Apiarists are often referred to as Bee Keepers. However, the title of “keeper” does not seem fitting of the role that Brian plays in the care of his bee colonies. Given the critical importance of bees to our existence, perhaps “Bee Guardian” is more suitable.

During the good years, Brian is happy to share in the bounty of the bees. The successive flowering of natives, during the long spring of 2014, delivered a “veritable tsunami of nectar” and the bees produced excessive quantities of honey. However, during the hard years, any harvest is carefully considered and not much honey is taken from the hives. The bees are also left with additional honey to survive through the winter months.

The current El Niño is delivering an extremely hot and dry year for Australia. They are experiencing extremely low rainfalls and have already had bush fires, without summer even having arrived yet. This means early sparse flowering. So to help the bees, Brian observes their behaviour, understanding what flower varieties they prefer and allowing the vegetable garden and herbs go to flower for as long as possible, providing a buffet of flower varieties for the bees.

There are many threats to the survival of bee populations across the globe; chemical intensive agricultural practices, GMO monocrop systems that are destroying biodiversity, the use of antibiotics in intensive honey production, as well as the bee parasite, the Varroa mite. Australia is the last continent on earth that doesn't have the Varroa mite. It has already arrived to New Zealand and will get to Australia one day. It causes huge problems for both kept and wild hives and is one of the contributing factors to colony collapse disorder. Most beekeepers are forced to use chemicals to keep it under control. The African bees, where Varroa originates, are aggressive and swarm readily and repeatedly, which is probably how they deal with it, but is not good for apiarists.

Brian is an apiarist that works with the natural ecosystem. The success and health of his bees is a direct reflection of the balance of the local ecosystem: its health, vibrancy, colour and diversity. This diversity is captured in the honey which is constantly changing in flavour depending on what the bees choose to feed on. “Can you taste the onion flowers? Or the borage, which they love?”

Shortbread originated in Scotland in the 12th century and was an expensive luxury reserved just for special occasions such as weddings, Christmas and New Year.

Honey is a sweet liquid used by humans since the ancient times. It is believed that it possesses antiseptic and antibacterial properties. It has high levels of monosaccharides, fructose and glucose.