“Our farming practice is simple: farming in harmony with Nature” 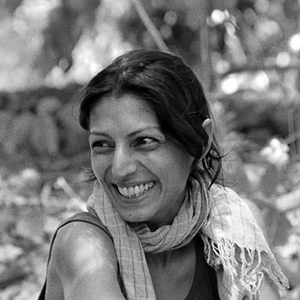 After working for the American EPA in Environmental Analysis and being confronted with the problems of the food system, Gaytri was drawn to work on the land and is now a steward of the lands of the Vrindavan Farm.

The land of the Vrindavan Farm was once an orchard of a single fruit; the mango. Slowly, with the help of stewards like Gaytri, the land is returning to a multi-layered food forest yielding a diverse range of fruits, herbs, spices, seasonal vetetables and still homes a host of indigenous trees and shrubs. This agroforestry system provides a great diversity of nutritional ingredients to local communities, produced naturally without intensive industrial manipulation.

Producing food in itself is not a challenge for India; over 70% of the population works in agriculture (the agrarian populous of Europe is <5% and <2% for the US). However, it is the method of producing food that has gone array: governments that sold out to large multi-nationals, chemical companies that control seed production, pesticides killing naturally occurring pollinators and fertilizers that are leaving the soil parched and deprived of organisms to create its own biomass.

These changes were introduced to producers under the lure of improved technologies and the promise of higher yields. However, without knowledge of the impact of their long-term use, producers now find themselves in an endless financial rut trying to produce greater outputs to meet the ever increasing input costs, which once never existed as their inputs of cow manure and native seeds were free. Gaytri sees that now people in India are feeding their families food that is not only making them sick, but also leading to the poor health of the ecosystem.

The natural farming practices at Vrindavan Farm, carried out by hand - the hands of indigenous people of the community, work to nurture the soil and earth, feeding the human body and spirit.

Paratha is a flatbread that originated in the north of India, the land of wheat. Moringa is the leaf of the Moringa Oliefera tree originating in the eastern Himalayan foothills.

Moringa leaf is high in vitamin C, potassium and magnesium, all of them essential for a good health. It is also a good source of antioxidants and essential amino acids.